The relative position property is perhaps the most mysterious of the position types. However, once we understand how it works, we can use it to our advantage when designing a site in Divi. What we discover may surprise you.

The relative position is one of four position types available in Divi. Here is a quick overview of each one below. 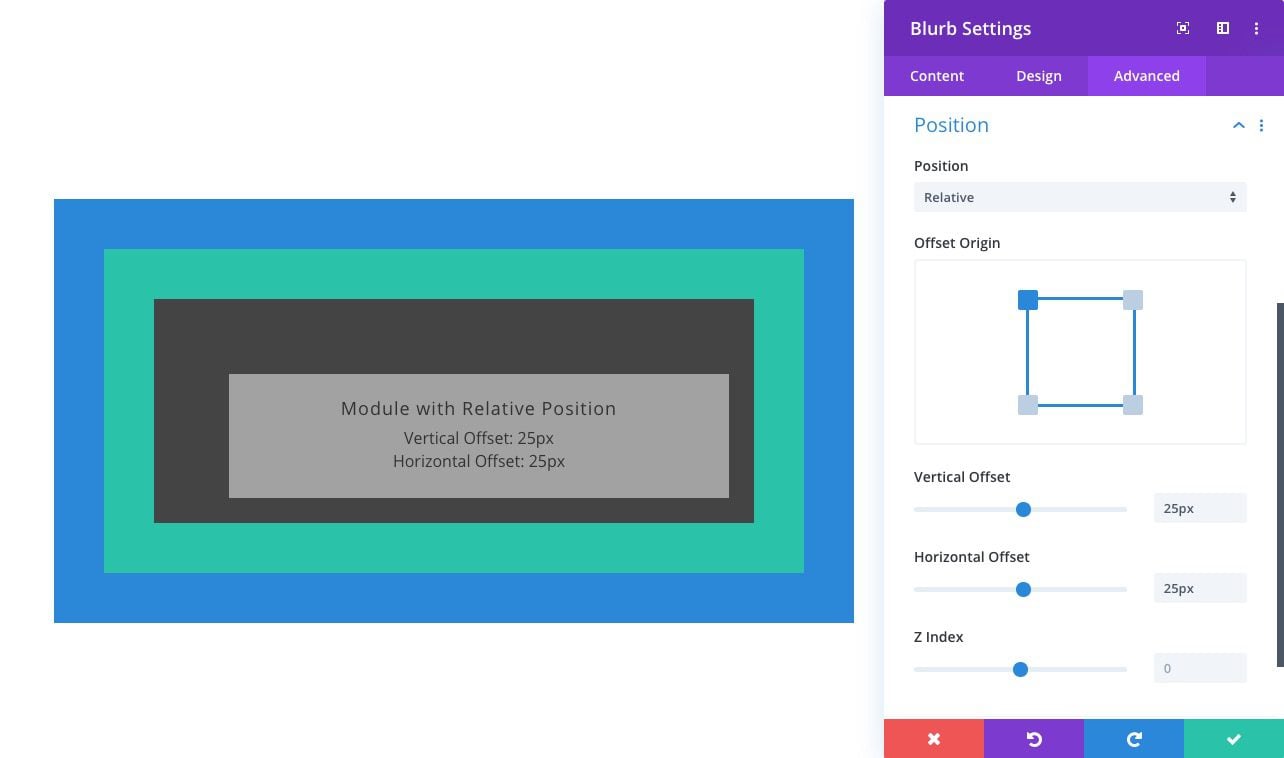 An absolutely positioned element breaks out of the normal document flow and therefore no actual space is created on the page for the element. We can think of it as an element that is floating on top of the other elements on the page that take up actual space. It will be positioned relative to the nearest positioned parent container. 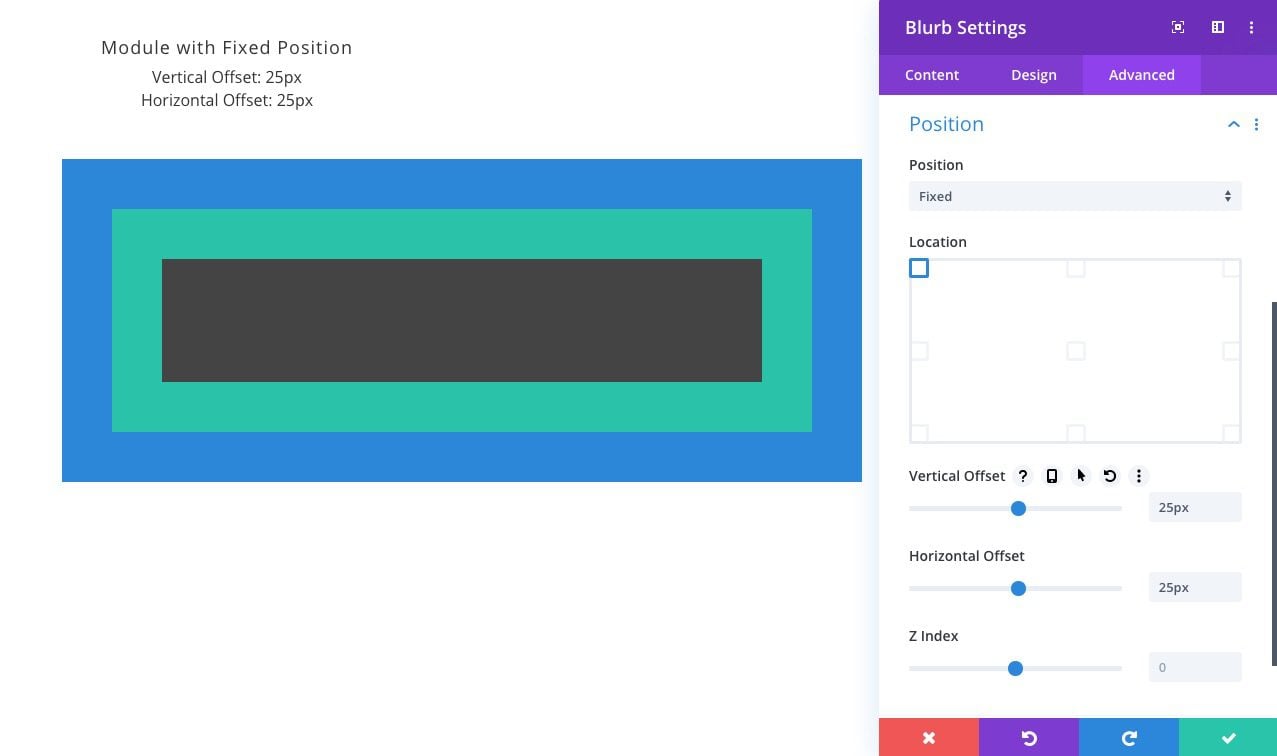 Like the absolute position, elements with the fixed position will break out of the normal flow of the page and have no actual space created within the page. The key difference between absolute and fixed is that the fixed position is relative to the browser window or viewport. In other words, no matter where the element is within the normal flow of the page, once it is given a fixed position, its position will now directly relate to the browser window. We can use the top, bottom, left, and right properties to position the element within the viewport. Because fixed elements will often hover behind or in front of other elements on the page, Z Index will help order fixed elements above others.

NOTE: There is another type of positioning in CSS called sticky. A stickily positioned element behaves like a relatively positioned element until we scroll to its container (at some point determined by the top value). Then the element becomes fixed (or stuck) until the user scrolls to the end of the container. However, the sticky position can be a bit unpredictable since other factors may inhibit the functionality. In Divi, the sticky option isn’t available within the built-in options for this reason. However, there are ways to use “position:sticky” in Divi.

How the Relative Position “positions” an element in Divi

As mentioned in the overview, the Relative position type is similar to the static “position” because the element remains in the normal flow of the document (the HTML on the page). The real difference is that once we assign an element with the relative position, it now has new options available for positioning the element. These options include the top, bottom, left, and right properties as well as the Z Index property. 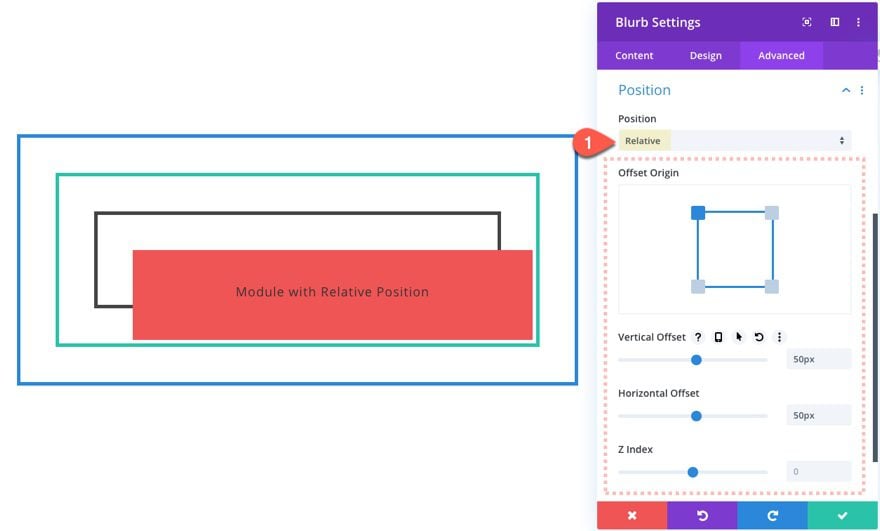 Using Offsets with the Relative Position

The Offset Origin and the Offset values will work together to position our element anywhere we want within the parent container. In this example, we have a module that has a relative position, a top-left offset, a vertical offset of 25px, and a horizontal offset of 25px. Notice how the offset values will move the element away from the offset origin horizontally and/or vertically. 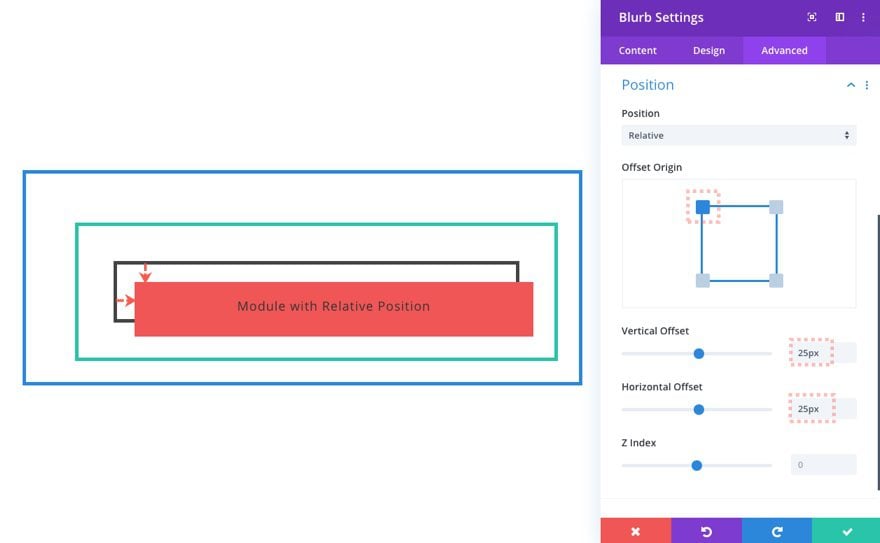 Here is the same module with the same offsets but with a top-right offset origin. 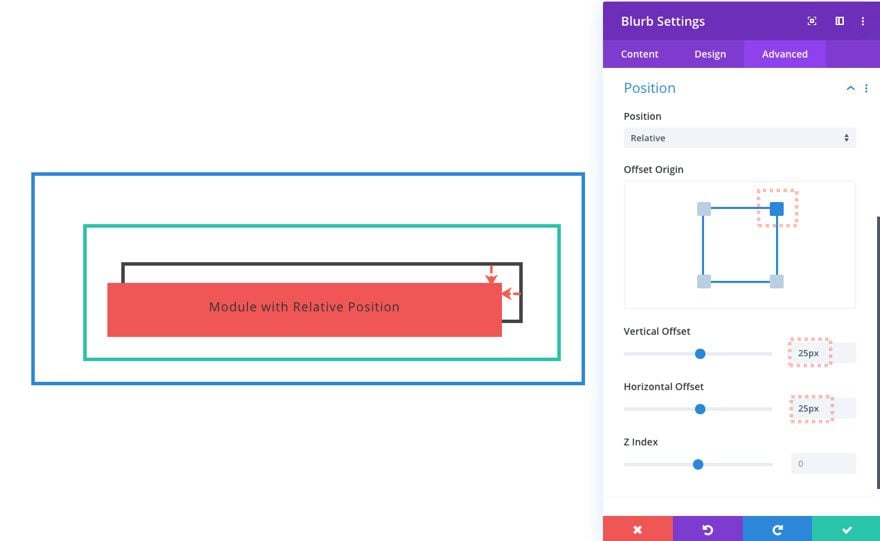 Here is the same module with the same offsets and a bottom right offset origin. 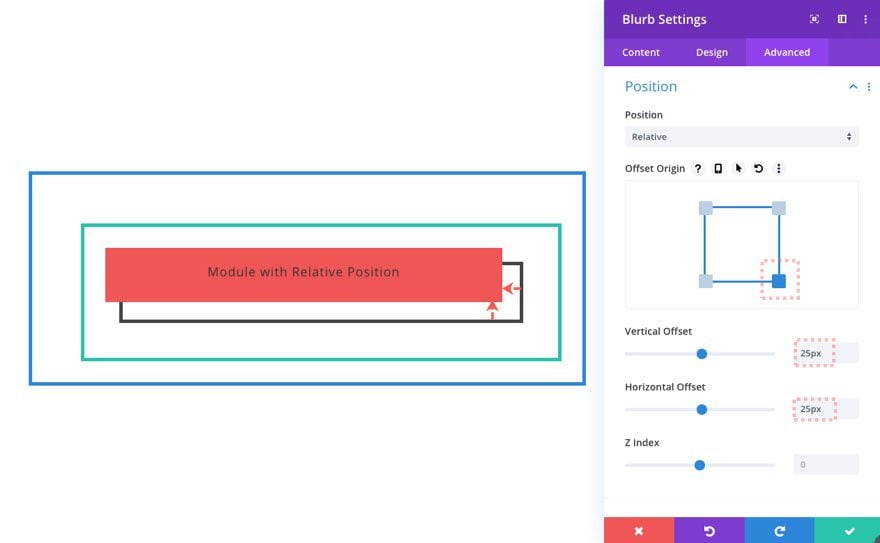 And here is the same module with the same offsets and a bottom left offset origin. 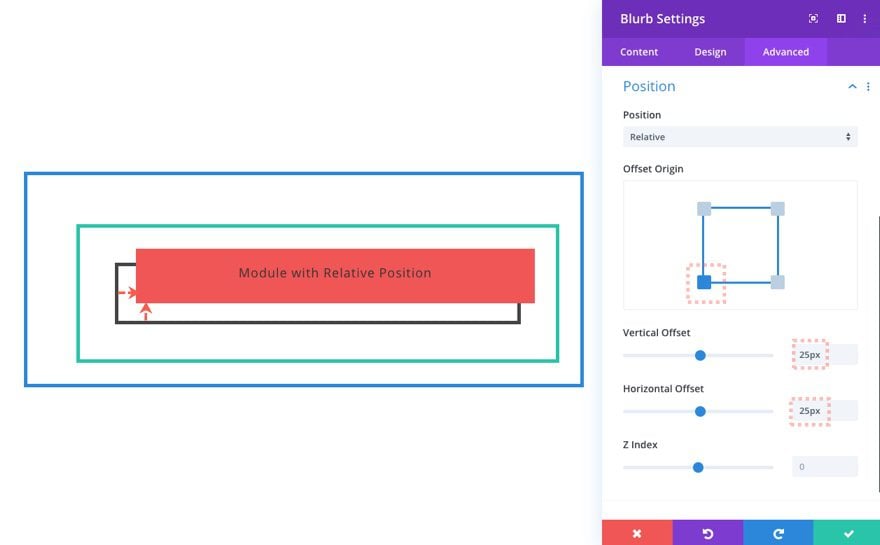 With relative positioning, the actual space of the element remains in its original place after the element is moved using the offsets (top, bottom, left, right). The element’s new position doesn’t move or affect any of the spacing of the rest of the elements on the page. It basically hovers over the other elements like a spirit that left its body.

Reasons to Use the Relative Position

#1 To Render a Parent Container for Absolutely Positioned Elements 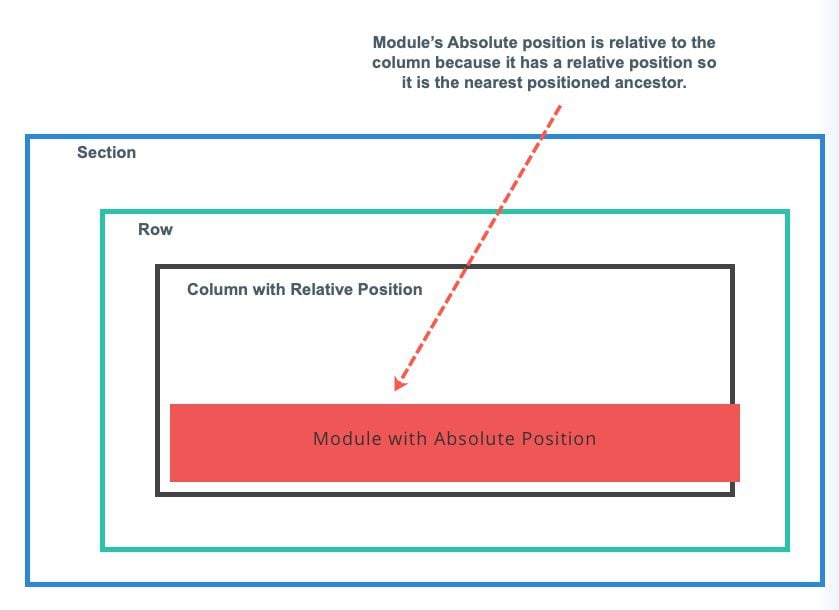 #2 To Move Elements without Affecting the Other Elements on the Page.

With the relative position, we can use the offsets to nudge items into alignment without affecting any other elements. And With Divi, we can take advantage of the draggable UI to position elements visually in real-time.

#3 To Use Z Index for Overlapping Other Elements

By default, static elements aren’t able to be reordered in the z-axis unless given the relative position. Once in the relative position, the element will stay positioned in the normal flow of the document. Only now, we have the ability to take advantage of Z Indexing to place elements in a particular order when overlapping one another. 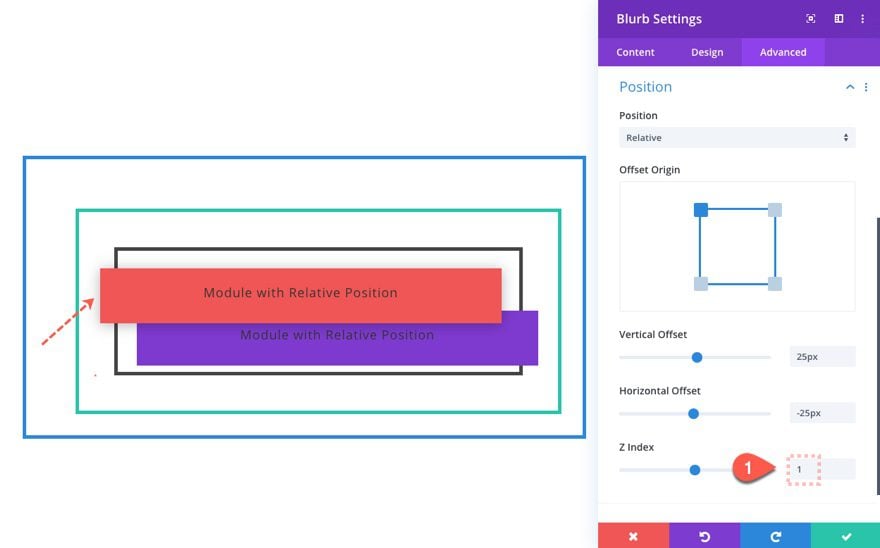 Relative positioning will leave behind the space of its original position. However, with a negative margin, both the content and its original space both are relocated. For example, if we add a negative top margin to a row in Divi so that the row overlaps the row above it, all the rows/content will move up with it. This leaves a bit of a mess to clean up that could be avoided by using the relative position offsets instead.

Here’s an illustration of what happens when we use a negative top margin to move a module upward. Notice how the rest of the elements below are brought up with it.

If we give the same module a relative position, we can use the vertical offset to bring the module upward without it affecting the rest of the spacing on the page.

The relative position is really similar to using transform translate to position elements on a page. They both move the element while leaving the actual space in its original place and without affecting the other elements on the page.

Translate is Better for Animation and Transitions (like hover effects)

However, it seems that translate is best for animation and transitions (like hover effects) because it provides quicker and smoother transitions. Using the top, bottom, left, and right offsets to animate or transition a relative element could be more choppy and could make our browser work harder than it needs.

If we are using relative length units (like % or vw) for responsive design, these will work differently with relative position and transform translate.

A Divi module with a relative position and a horizontal offset of 50% will move the module horizontally the amount equal to 50% of the width of the parent container (or column). 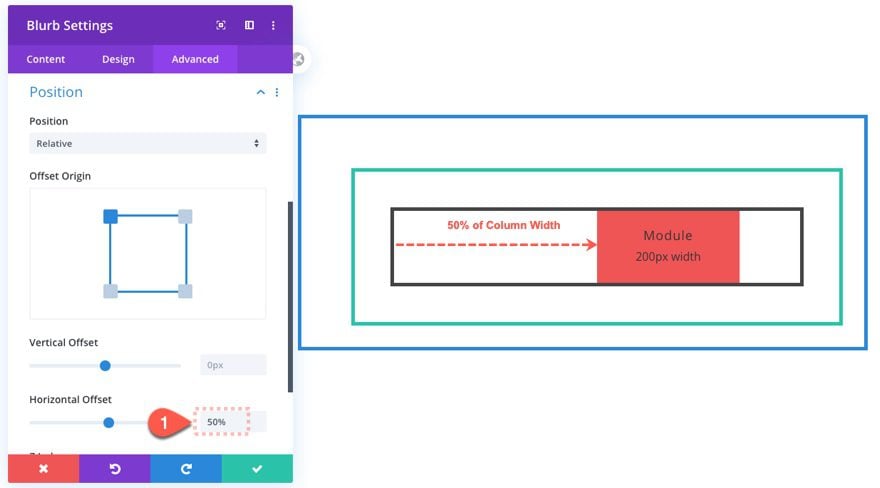 A Divi module with a transform translate (X-axis) of 50% will move the module horizontally the amount equal to 50% of the width of the module itself. 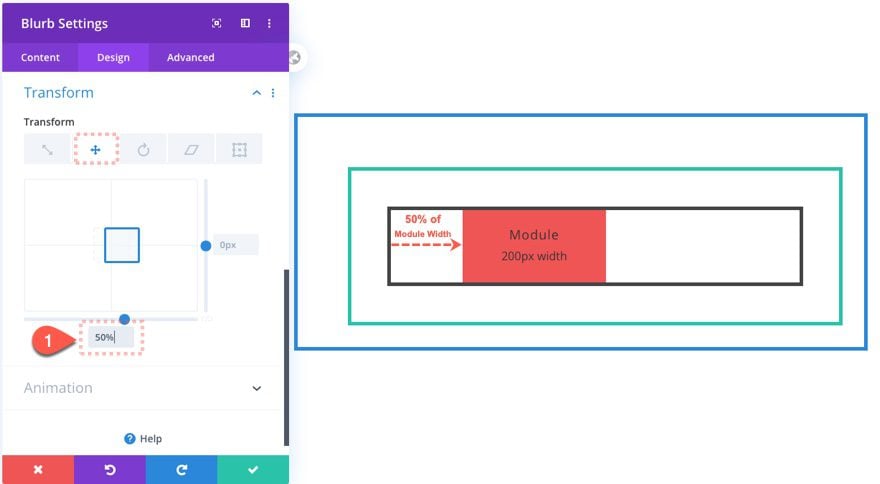 As we just covered, the relative position is relative to the parent and the transform translate property is relative to the element itself. Because of this, we can use both in combination for positioning elements just the way we want. We can even use this technique to center elements in their container.

For example, we can use the relative position horizontal offset to position the module to the right exactly 50% of the column width.

Then use the translate property to move the module 50% (of the module width) to the left. This will make sure the module stays in the center of the column no matter the width of the module. 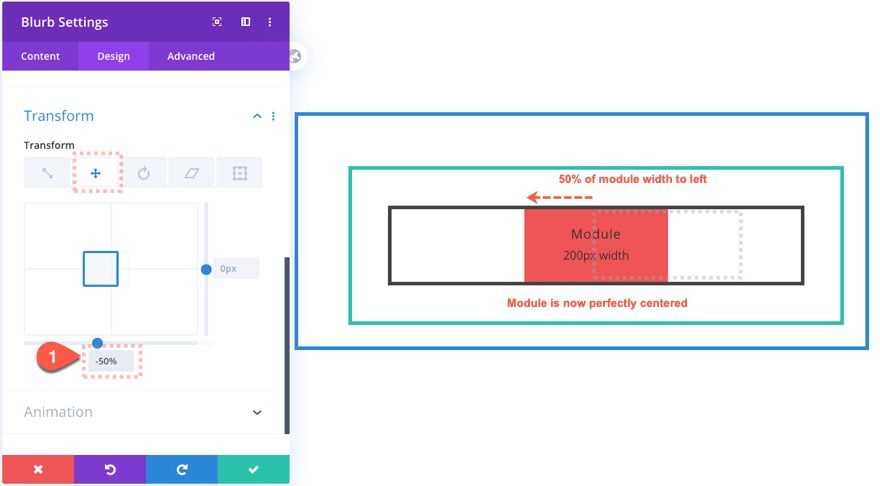 If you are like I was before writing this article, you probably didn’t understand or use the relative position type very well. Perhaps the most surprising aspect of this relative position is how it impacts (or doesn’t impact) the rest of the design on the page. Not only does it work in tandem with the absolute elements, but it also works well with transform translate to position elements in the perfect spot.

What has been your experience with the relative position type?

I look forward to hearing from you in the comments.